The largest study to compare the viability of vitrified and fresh sibling oocytes has reaffirmed their comparable efficacy, but only when the efficiency of the vitrification procedure – and oocyte loss at warming - are taken into account.

The latest registry reports – from ESHRE, SART, Japan, China, HFEA – all comment on the game-changing impact of vitrification in assisted reproduction. This is most obviously seen in embryo freezing, both in the growing number of freeze-all cycles and in cumulative transfers following an initial fresh treatment. For example, the HFEA’s latest annual report – published in June for UK activity in 2018 – noted that ‘fresh embryo transfers decreased by 11% between 2013 and 2018, while frozen embryo transfers almost doubled and accounted for 38% of all IVF cycles in 2018’. This trend in the UK is similarly apparent in all other registries, as reports from ESHRE’s own European and ICMART’s global monitoring noted at this year’s annual meeting.

An equally dramatic effect of vitrification has also been seen in oocyte cryopreservation, which now, following results from ‘the largest cohort study’ comparing outcomes from fresh and vitrified sibling oocytes, has posted comparable results, including live birth rates.(1) However, such reassuring results have come with an important caveat – that this comparable efficacy was found only when the number of oocytes available after vitrification and warming was equal to the number of fresh oocytes available. When not equal – when left to overall analysis – fertilisation and delivery rates with the vitrified oocytes were inferior. There was, therefore, an element of vitrification ‘efficiency’ implicit in the results, which, say the authors, ‘must be taken into account to achieve the same reproductive outcomes as with fresh oocytes’.

Thus, the overall unadjusted results of this study showed that the vitrified oocytes achieved lower ongoing pregnancy and live birth rates than the fresh. In offering an explanation for the results and any ‘inefficiencies’, the authors write: ‘Vitrification is per se a delicate technique which requires exact adherence to protocol, and it is prone to inefficiencies, especially among less experienced teams.’ Adjusting the analysis to allow equal numbers of fresh and vitrified oocytes would eliminate the effect of any ‘inefficiency’ and any deleterious effect of oocyte warming.

Rita Vassena, from the Eugin Clinic in Barcelona and one of the study authors, explained to Focus on Reproduction: ‘Even in the best-case scenario, only 90% of oocytes survive warming, and sometimes less depending on how good a clinic’s protocols and quality controls are.’ And this loss of oocytes at warming may explain a finding of many registry results, that outcomes from cycles with vitrified oocytes are inferior to those with fresh. ‘We now conclude that the explanation for this is the way the vitrification is performed,’ said Vassena. ‘It’s that the clinics don’t take into account their own efficiency when planning a vitrified cycle, rather than any deleterious effect of vitrification per se.’

It was to test this ‘efficiency’ factor that the study paired fresh cycles with sibling vitrified cycles in which the same number of oocytes were available for ICSI. And it was only then that the authors found similar reproductive outcomes in the two groups, ‘indicating that efficiency plays a significant role in determining the reproductive outcomes of these cycles’.

This complex study was a retrospective analysis of 1844 egg donation cycles (35,654 oocytes for the analysis), with each donor in the study providing enough oocytes for at least one recipient cycle with fresh oocytes (2561 cycles) and one recipient cycle with vitrified (2471 cycles) from the same stimulation. All the transfers (n = 5032) were carried out between 2011 and 2017.

Results showed that, without adjusting for the efficiency requirement, ongoing pregnancy rates were higher in the fresh cycles (37.5% vs 32.1% per embryo transfer). However, when the number of fertilised oocytes was the same for fresh and vitrified oocytes (ie, when the potential of oocyte loss during the warming process was taken into account), reproductive outcomes rates were comparable – an ongoing pregnancy rate of 33.5% in both groups.

The authors thus concluded that oocyte vitrification is indeed able to maintain ‘the developmental potential of human oocytes within a reasonable biological range, clinically comparable to fresh oocytes’. Moreover, they speculate that the loss of oocytes at warming is the ‘likely main reason’ for any lower clinical results (as has been reported) in these cycles. This loss, they suggest, can be offset by efficiency measures - such as ‘assigning 10% more vitrified oocytes in high-quality programmes’ to account for a 90% survival rate at warming. ‘If your clinic is not so efficient and you lose, say, 20% of oocytes to warming, then you should assign at least 20% more oocytes when planning to use vitrified oocytes,’ says Vassena.

For many years successful egg freezing was one of the perennial challenges of ART. Slow freezing caused intracellular ice formation which at thawing was found to affect the oocyte’s microarchitecture and cryo-survival. However, a large systematic review from 2017 found that vitrification is now ‘the best strategy for cryopreservation of all developmental stages from mature oocyte to embryos at the blastocyst stage’, with better oocyte survival rates than with slow freezing.(2) The review also noted, borne out by widespread adoption today, that viable oocyte freezing would revolutionise egg donation by making possible egg banking. Now, with a wide choice of vitrified donor oocytes, egg donation could proceed without long waiting-lists for recipients, cross-border treatments, or synchronised cycles.

As the introduction to this Update review suggested, it was ironically Italy’s ban on embryo freezing - in the notorious Law 40 of 2004 – which encouraged IVF labs in Italy to look for alternatives, and oocyte cryopreservation was one they found in the vitrification studies then emerging from Japan. Those first studies establishing the viability of vitrified eggs alongside fresh were performed by Italian groups (working with Spanish) and would in short time lay the groundwork for the indispensable place of vitrification in today’s ART programmes. As the Update reviewers concluded, ‘based on this evidence, in particular regarding cryosurvival rates, laboratories that continue to use slow-freezing should consider transitioning to the use of vitrification for cryopreservation’. However, despite the assurance of this review and numerous trials, comparable efficacy between fresh and cryopreserved oocytes should not be taken for granted, and, as this latest study indicates, the lab’s efficiency in its vitrification processes – and particularly in oocyte warming - may well be a factor in clinical outcomes. 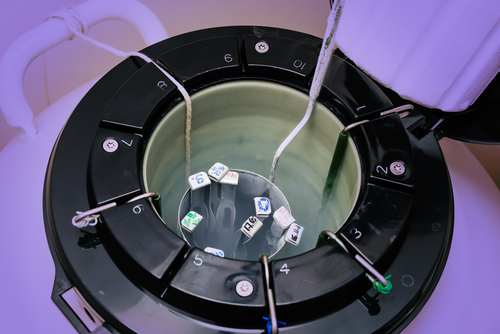