A cross-linkage analysis of more than 90,000 deliveries has found that women with a history of PCOS were at a higher risk of gestational diabetes, pre-eclampsia and Caesarean section than those without PCOS; extra monitoring is advised for PCOS pregnancies.

A prodigious cross-linkage registry study from the USA has confirmed what many smaller studies have previously found, that pregnant women with polycystic ovary syndrome are at increased risk of gestational diabetes, hypertensive disorders of pregnancy and delivery by Caesarean section.(1) Moreover, the infants born to PCOS women were found at increased risk of low birthweight, small for gestational age, preterm birth, prolonged neonatal hospital stay and infectious and respiratory conditions within the first year of life.

The risks of such pregnancy complications were found sufficiently high for the authors to advise that ‘obstetricians should be aware of patients’ PCOS status and closely monitor for potential pregnancy complications to improve maternal and infant perinatal health outcomes’. Adjusted relative risks for gestational diabetes were 1.51 (1.38-1.65), for pregnancy induced hypertension 1.25 (1.15-1.35) and Cesarean section 1.07 (1.02-1.11). The association between PCOS and gestational diabetes was strongest in women with a pre-pregnancy BMI of <30 kg/m2. The authors’ warning echoes that of the 2018 international guidelines on PCOS, which similarly recommended increased monitoring for women with PCOS during pregnancy.(2)

This latest study linked registry data from all deliveries in the state of Massachusetts from 2013 to 2017 to SART’s outcome reporting system and a database of all private and public insurance claims. Identification of a history of PCOS was based on insurance records before an individual’s delivery date. The sample included 3552 deliveries to women with a history of PCOS and 88,273 deliveries to women without. Deliveries within these two groups were further classified as ‘non-infertile, subfertile/infertile or ART’. And models for risk estimate were adjusted for maternal age, BMI, education, plurality of delivery, and history of hypertension and diabetes.

The cardiometabolic findings of this study – particularly related to gestational diabetes – are roughly in agreement with those of earlier studies.(3) Indeed, insulin resistance and hyperinsulinemia are well recognised features of the pathophysiology of PCOS, while the third ESHRE/ASRM consensus on PCOS, published a decade ago, agreed that metabolic disorders associated with PCOS are major predictors of prediabetes, diabetes, and metabolic syndrome.(4)

Around 4% of the all deliveries in this population study were to women with a previous diagnosis of PCOS, a not inconsiderable proportion - and one supporting the Rotterdam consensus’s assertion that PCOS is ‘the most common endocrine disorder in females’. Thus, while associations with the cardiometabolic complications of pregnancy might come as no surprise in this study, it was also emphasised that the neonates born to PCOS women were at increased risk of low birthweight, small for gestational age, preterm birth, prolonged neonatal hospitalisation and infectious and respiratory conditions within the first year of life. This trend too has been observed in earlier studies, usually attributed to ‘both genetic and environmental factors, starting within the intrauterine environment’.(5)

This latest study thus reinforces the conclusions of several others that pregnancy in women with a history of PCOS poses specific risks related to the mother and her infant. Recent guidelines have emphasised that this patient group should be keenly monitored and this latest study now urges pregnant women to discuss their gynecological history with providers - and indeed proposes that those with a history of PCOS ‘may benefit from additional screening and/or early intervention’. 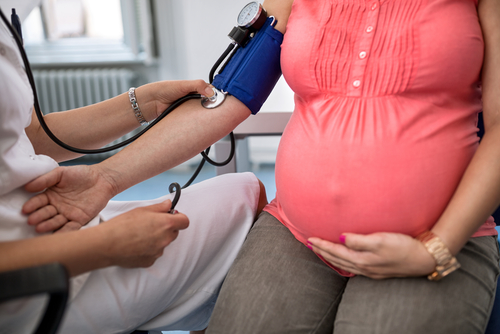