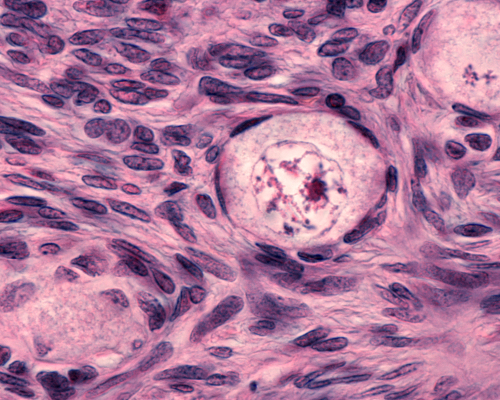 A randomised trial comparing two ‘third-line’ approaches in women with PCOS-related infertility – IVM with no ovarian stimulation and IVF with standard stimulation – found that the former removed the risk of OHSS but at a cost of lower live birth rates.

In vitro maturation has never fulfilled the promise of its first descriptions more than 20 years ago. However, because it represents an IVF technique without the need for ovarian stimulation, IVM is frequently proposed as an alternative to IVF in women treated for infertility with high measures of ovarian reserve or with PCOS. The aim, as all guidelines have made clear, is to mitigate the risk of OHSS in these high-risk patients. However, the latest international recommendations on the management of PCOS were somewhat lukewarm on IVM, noting only that ‘in units with sufficient expertise, IVM could be offered to achieve pregnancy and livebirth rates approaching those of standard IVF ± ICSI treatment without the risk of OHSS for women with PCOS’.(1)

A 2021 ‘committee opinion’ from the ASRM identifies some of the unknowns associated with IVM, notably ‘limited evidence-based strategies’ to reduce the risk of OHSS (in follicular priming, for example), a ‘high level of attrition’ from retrieved immature oocytes to good-quality blastocysts, and, in some studies, a lower rate of outcome than found in mildly stimulated conventional IVF.(2) The latter, an area of continuing uncertainty in the fertility treatment of women with PCOS, has now been investigated in a new randomised trial, which found that one cycle of IVM without any stimulation or hCG priming was significantly less successful than one cycle of standard IVF in women with PCOS in terms of 6-month cumulative live birth rates (22.3% vs 50.6%).(3)

However, it was notable that in the trial patients (a total of 351 women all with PCOS and treated for infertility) there were no cases of severe-moderate OHSS in those randomised to IVM, while in the IVF group ten women (5.7%) had moderate OHSS and one (0.6%) severe. These results were evident despite the study’s freeze-all and GnRH antagonist protocols for both groups - though the authors suggest that lower rates of OHSS might have been found if an agonist trigger had been used.

Nevertheless, despite the zero rate of OHSS in the IVM patients, its lower efficacy was statistically significant (p<0.001). This, the authors suggest, might be explained by a lower rate of maturation in the IVM oocytes, and a lower number of available MII oocytes. The maturation rate in this trial was 45.7% after 28–32 hours of IVM culture, which, the authors note, was consistent with other studies of IVM without hCG priming. And it’s because of this lower maturation rate, they suggest, that the mean numbers of 2PN, good-quality day 3 embryos and usable blastocysts were lower in the IVM group than in the IVF. These results seem to reflect the ASRM comment that there seems to be decline in the rate of blastocyst formation and implantation in IVM. Indeed, it was notable in this study that the rates of ongoing pregnancy leading to live birth were comparable between the IVM group (28.0%) and IVF group (37.5%) after the first single blastocyst transfer, again suggesting that blastocyst formation was the limiting factor.

The authors thus propose that further studies are now needed to compare outcomes with other IVM protocols and with IVF with an agonist trigger. Indeed, new IVM protocols have been described aiming to improve the developmental potential of immature oocytes.

The 2018 international PCOS guidelines, in which ESHRE was a collaborating partner, gave an increasing emphasis to education, lifestyle modification (weight loss) and quality of life in the management of PCOS. However, as recommended in the second ESHRE/ASRM consensus on PCOS in 2007, ovulation induction (with clomiphene citrate) remains the first-line pharmacological intervention for infertility.(4) The 2018 guidelines recommend ovulation induction with gonadotrophins as second-line agents, which, although associated with higher pregnancy rates than clomiphene citrate, should be cancelled if more than two mature follicles develop. IVF itself is described as ‘third-line therapy’ when other approaches have failed, while adding that the lack of evidence associated with IVM was ‘important’. This, as the authors of the randomised trial now conclude, underlines ‘strong research recommendations’ for IVM, especially in view of its potential safety as reflected in this trial.