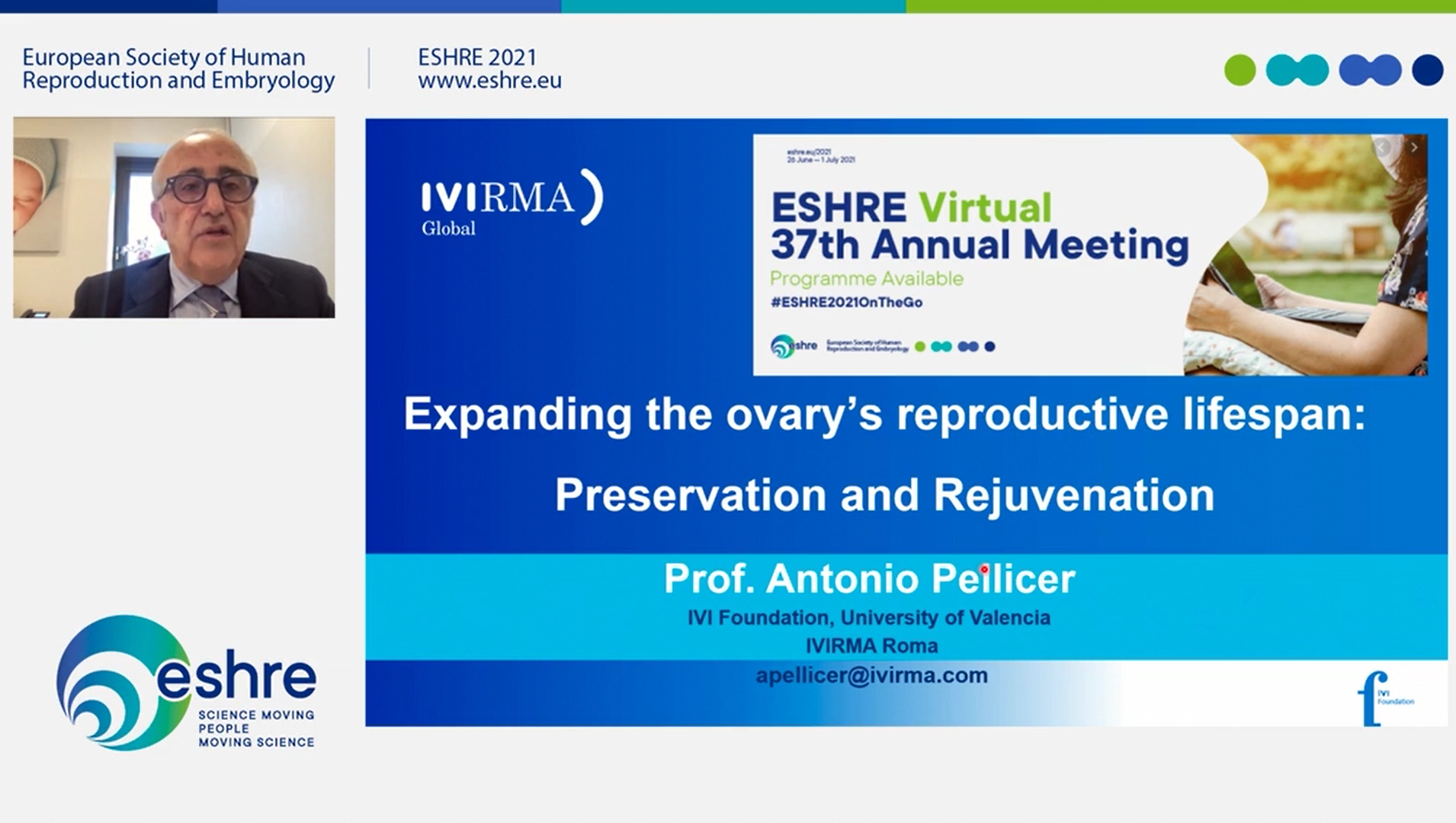 With more than 9000 participants registered to attend remotely, this year’s annual meeting began as ever with its two keynote lectures, the first based on Human Reproduction’s most downloaded recent paper and the second on emerging techniques to extend the reproductive function of the ovary.

The two keynote presentations which opened this year’s annual meeting were each of great topical interest. The first, the Human Reproduction lecture, reaffirmed the likelihood that a delay of up to six months in starting IVF treatment – as occurred at the outset of the COVID-19 pandemic - would not compromise outcome, even in patients over the age of 40 and with low measures of AMH.(1) The results, warned investigator Phillip Romanski of the Weill Cornell Medical College in New York, remain applicable, with the pandemic still virulent in some parts of the world and IVF services ever subject to delay and suspension.

The second lecture, on ‘expanding the ovary’s reproductive lifespan’ from the outgoing editor-in-chief of Fertility and Sterility, Antonio Pellicer, has also attracted recent headlines, largely for the escalation in elective treatments to preserve fertility to a later maternal age. Such social egg freezing services, said Pellicer are ‘growing exponentially around the world’, largely driven by age and circumstances. But this first part of his lecture was essentially on need, not on choice, and the driver for expanding the ovary’s lifespan was not physiology but pathology – the effect of endometrioma and other diseases requiring chemotherapy, and POI.

So far, he reported, results from fertility preservation in oncology cases suggest that cumulative LBRs from medically indicated treatments are lower than from elective treatments (42% vs 69%), while a recent report from Belgium shows a LBR of 26% (natural or ART) from ovarian tissue transplantation. A small study from Pellicer’s own group at IVI in Spain comparing the two approaches showed a LBR of 33% after oocyte vitrification and 18% after ovarian tissue transplantation.

The second part of this lecture turned to ‘new ways of ovarian reactivation’ and the challenge of rescuing residual follicles in the ovary. He reviewed three methods, some initiated and all comparatively analysed by his own group at IVI: in vitro activation, as described by Kawamura et al in 2013; ovarian infusion of platelet-rich plasma, as first described by Pantos in 2016; and autologous stem cell ovarian transplantation, as described by his IVI group in 2018.

Reports on in vitro activation, as for so many of these techniques, so far rely on small case studies with no RCT evidence, but an effect seems dependent on ovarian fragmentation to promote follicular growth via an enhanced expression of growth factors and inhibitors of apoptosis. The concept, said Pellicer, has recently been revisited by his group at IVI with a technique of drug-free follicular activation, and a series of 40 women with POI (‘true’ POI and ‘fluctuating’ POI) has so far recorded seven pregnancies.

There has been much popular interest in the effects of platelet-rich plasma when infused to the ovary for the purposes of ‘rejuvenation’. PRP, explained Pellicer, is a concentrated form of plasma obtained from centrifugation of whole blood from the patient herself, and is said to enhance tissue healing and recovery through release of growth factors and cytokines. A 2020 paper in the journal Aging reported that, of 311 women with POI, 201 developed antral follicles and attempted IVF, measures of ovarian reserve were found to increase and eight patients had ongoing pregnancies.

The third technique, autologous stem cell ovarian transplantation, has also been applied in cases of accelerated ovarian decline as reflected by low measures of ovarian reserve and POI. Studies describing a return of fertility following bone marrow transplantation date back more than 20 years but the technique has now been revived; recent studies in animal models found the restoration of long-term fertility and the birth of healthy offspring. A pilot study in 18 POI patients (in which one ovary was treated and the other acted as a control) found that 81% of patients had positive changes in ovarian reserve, more follicles developed in the injected ovary and three IVF pregnancies were achieved.(2)

These studies indicating that stem cell-secreted factors might have regenerative properties in the ovaries have now been extended in mouse models to suggest that a combination of approaches may yet hold the greatest promise. Results of a recently published study showed that an infusion of human plasma enriched with bone marrow stem cell factors by granulocyte colony-stimulating factor or umbilical cord blood plasma reduced apoptosis in ovarian tissue to rescue follicular development and fertility.(3) Pellicer described this activated granulocyte colony-stimulating factor plasma, enriched in both stem cell-secreted factors and growth factors, as ‘the most promising treatment’ because of its apparently potent restorative effects on the ovary and its autologous source. ‘Plasma is the way to go.’ 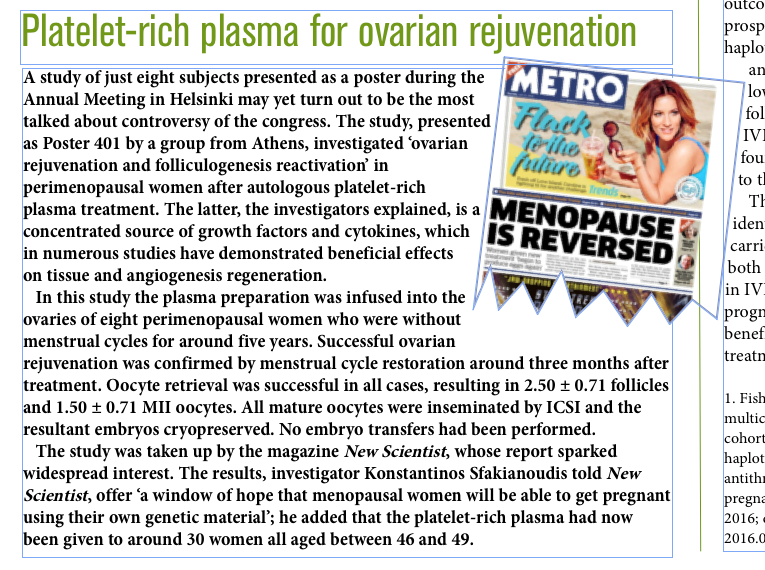 Platelet-rich plasma and the restoration of fertility in POI