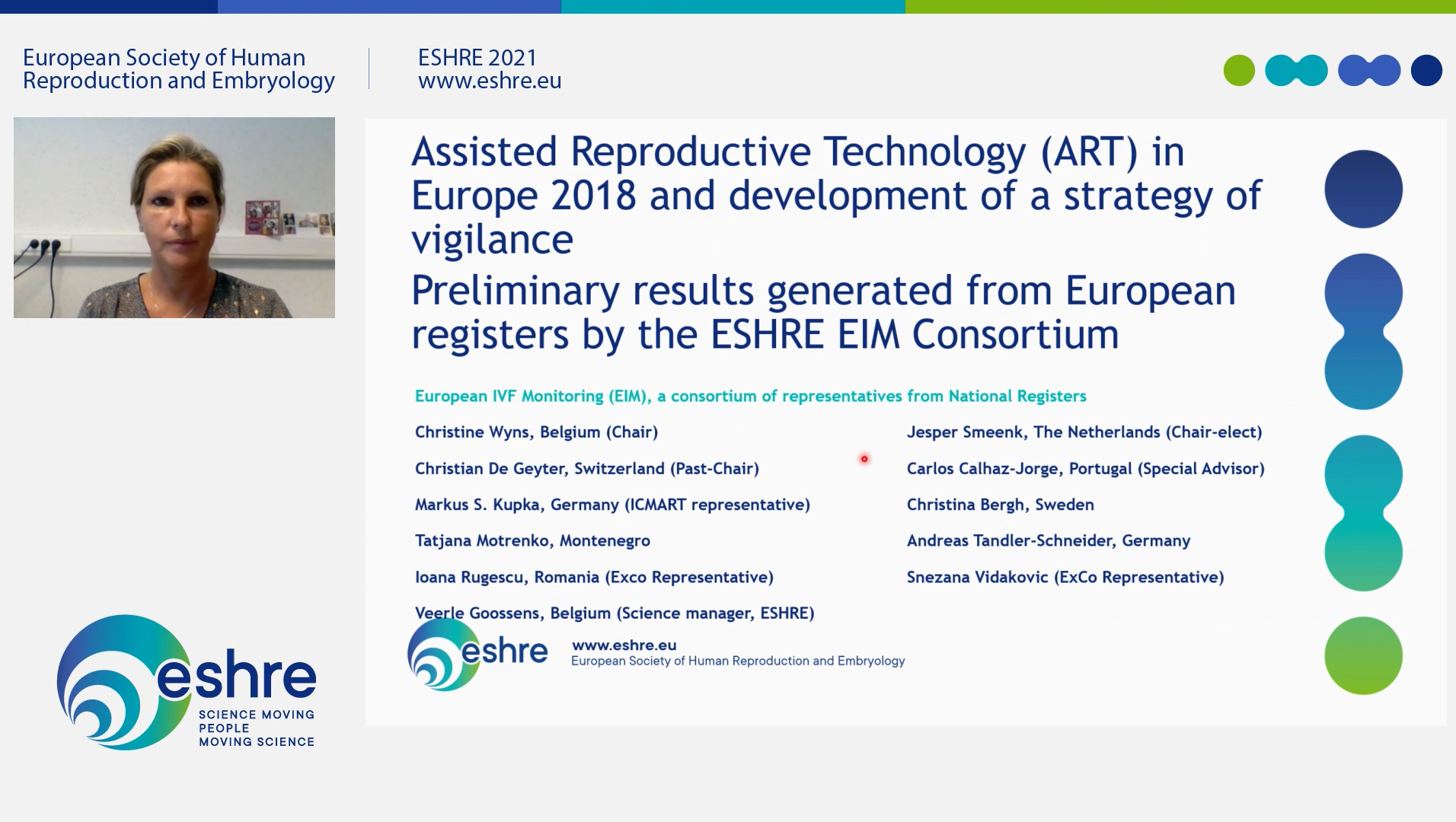 It's now 20 years since ESHRE European IVF Monitoring (EIM) Consortium was founded, with activity data for 1997 as its first publication. Since then the Consortium's annual reports have been some of the most widely cited in Human Reproduction, and today providing more than a mere snapshot of what's going on. In Vienna Christine Wyns, head of gynecology and andrology at the Cliniques Universitaires Saint-Luc and Professor at the Catholic University of Louvain in Brussels, took over as Chair of the Consortium.

FoR: Your work in Belgium is in ART, with a strong research interest in fertility preservation in pre-pubertal boys. So how did you come to be involved in the EIM Consortium and working with registries?
Christine Wyns: I was always active in the College of Physicians in Reproductive Medicine in Belgium, which is an agent of the federal authority for registering all cycles in ART and now almost all the IUIs, with a mission to improve quality of care. I was involved in developing the core dataset for the registry and am now Vice President of the College. I later became our national representative with ESHRE's EIM and was later elected to the steering committee four years ago.

FoR: Were you involved in the regulatory changes in Belgium which brought full reimbursement for IVF and ICSI?
CW: Yes, I took part in many of those early discussions. More recently I've been involved in discussions on reimbursement for onco-freezing. Originally this was only in the context of cancer treatment, but from last year we managed to extend reimbursement to patients who, for example, need gonadotoxic therapies before bone marrow transplantation for benign diseases.

FoR: The reimbursement of ART in Belgium is very generous, and based on a policy of single embryo transfer and low rate of multiple pregnancies. You must have needed a lot of data to convince the authorities?
CW: Yes, our case was based on a hypothesis that we could reduce the twin rate from near 30% to 10%, which in turn would reduce the level of maternal and neonatal care from premature births. We used the data of our ART registry for the proposal.

FoR: And it's clearly been a successful policy for several years now. In fact, you can see from EIM data that access to IVF is greatest in Belgium and Denmark - two countries where treatment is fully reimbursed. But it is conditional on a first cycle of single fresh embryo transfer?
CW: Yes, if the patient is under the age of 36, she can have only one embryo transferred at the first attempt, between 36 and 40 two embryos at the first attempt, and there's no maximum for patients over the age of 40 - though most centres never transfer more than three.

FoR: So you do still have a multiple pregnancy rate in Belgium?
CW: Yes, we've analysed our data and found that the highest prevalence of twins lies in second attempts before the age of 36 and in the group of 36-40s, particularly those aged 36 and 37. So we're hoping to reduce this twin rate further.

FoR: So now, adding to all this, you have become Chairman of the EIM Consortium for the next two years, and I imagine it's quite a tough job - mainly because there's simply so much data to bring in and analyse.
CW: Yes, we do have Veerle Goossens as our scientific officer in ESHRE's Central Office to collect the data, but many tables need analysis and comparison with previous years - because that's how the data appear in our annual reports in Human Reproduction.

FoR: Right now we're going through a great change in ART, probably because of vitrification. Embryo freezing has become more efficient, we can freeze eggs, we're seeing more freeze-all cycles. Are these the biggest changes you've seen over the past five years or so - and the one likely to affect our registries?
CW: For me the biggest challenge in registry data is that patients now have more mobility during their treatment. They start at one place and then move their frozen embryos or gametes to continue in another country. So ideally we should find a way to trace this reproductive material beyond borders and look at cycles cumulatively. A fresh cycle doesn't mean much any more if you look at it globally - especially when some countries are unable to tell us in which cycle they did a freeze-all procedure. This means that our figures on outcome for fresh transfers can often decline. If you cannot isolate those who had the freeze-all cycles, all the calculations are incorrect.

FoR: Do you have any idea of how many cycles we're talking about? Ten per cent . . .
CW: We really don't know. I've asked other registries if they know how many countries or what proportion of countries could provide precise information about freeze-all. The US can because of their cycle-by-cycle data, but we're not clear about anywhere else.

FoR: We did see in the latest SART data, which was for 2016, that 80% of all transfers in the USA were from frozen embryos. This seems a huge number to me.
CW: Yes, because the cryopreservation protocols and embryo survival rates have improved so much. It means that if you freeze, say, six embryos you could have six subsequent transfers.

FoR: So do you see freezing as the biggest challenge for EIM right now in providing an accurate picture of what's going on?
CW: To have an accurate picture we'd need to start by only registering cycle-by-cycle, and this is our major challenge right now. But when you do register cycle-by-cycle there are other challenges related to privacy regulation. If the data allow identification, or make the patient identifiable, we could run into problems. For instance, collecting the name of the clinic, the patient's date of birth, the rank of attempts may already jeopardise anonymity. That's why we now work with aggregate data, where there's no possibility of identification.

FoR: We've heard that in the EIM network there are 12 countries now providing cycle-by-cycle data. So in these countries could you in theory begin with a started cycle and go through to a delivery.
CW: This is one of the the steering committee's plans, to collect and analyse the cycle-by-cycle data separately. There will be less data missing this way, which will let us see the true figures - even if it is for just 12 countries.

FoR: So then you'd have a very accurate snapshot, but for a smaller number of centres?
CW: Yes, it would help us see any problems and where care can still be improved. It will also allow us to see inconsistencies more clearly than with aggregate data.

FoR: And what about the greater responsibilities of EIM? There's no collection of ART data in Europe like this, and we're hearing more and more about a collaborative role with the European Commission in terms of vigilance.
CW: Yes, I have already been involved in several meetings with the Commission - on assessing the registry framework, factors affecting data collection, and the output of existing registries in different fields. The Commission, I would say, is still aiming for 'clean' data, but at this stage we can't have clean data if we don't cover every cycle in Europe. Not every country in Europe even has a registration system, and some of those who do have have only a partial system.

FoR: Would the Commission not be happy with that? Are they looking for a comprehensive 100% dataset?
CW: Full coverage would be the final aim, yes. This would allow us better surveillance and vigilance. But we would still aim to collaborate with the Commission. The best way may well be in some kind of funded research programme which allows us to build cycle-by-cycle registration software in the first instance for countries who do not have a registry. We could later assess feasibility of using the same software in countries which already have their own registry. Using a single European code - as is already required for donated reproductive material - would be a vision for the future with full coverage of ART data.

FoR: So do you still think the EIM Consortium is the most likely service able to provide a comprehensive system of vigilance?
CW: Well, it's certainly the only organisation with such a registry of ART and IUI in Europe, so I think that's a good place to start. It would also mean that ESHRE can continue its developing relationship with the EU.

FoR: EIM is an admirable, well respected registry, but it still only represents around 80% of all cycles in Europe. Do you think there's any way that coverage can be raised to 100%?
CW: That certainly is a challenge, because some countries do not have their own registration system. If we could provide a software program, for example, and set up a translational database for these countries, it might become possible. But it still raises a problem with those countries who already have their own data collection systems. We'd need to develop a link between one system and another. At this stage we still need to assess feasibility.

FoR: And is that being done?
CW: We are discussing it, and identifying the countries who might benefit - but there is still a problem of willingness to participate. Not every country necessarily wants ART registration. They have other priorities. It would be good if we could provide the software because that's one way we could increase our coverage in Europe.

FoR: So how likely is it?
CW: I think it will depend on the finances. If we can find the funding - perhaps as an EU project - it could work. But first we'll have to find the most appropriate funding system.

FoR: So as you look ahead with the EIM Consortium do you see its role becoming more political than, say, clinical? Clinically, the data in their present format allow comparison between countries, but they don't tell us too much without cycle and live-birth data. So where is the real value of EIM data?
CW: I think the first important point is knowing how many children are born from these techniques. The second is to see which techniques are being used, and where they are available. And certainly, when it comes to outcome, we can look at our evolutionary trends, but we still need that data-cleaning which would come from cycle-by-cycle reporting - a prospective way of reporting data. There would be real clinical interest to see, for example, better results in one country and to be able to find out why. This would be a basis for improving results in the field for everyone.

FoR: So what you're saying is that the clinical and scientific implications of the EIM data are still the most important?
CW: Yes, still very important, and as yet they're not going to overtake any political aims of vigilance or surveillance. That's our next - and very important - objective, to move towards a position where we can provide reliable data on the safety and quality of the treatments we provide our patients. So it's a way of moving forward. We began 20 years ago with a very simple model, made progress by extending participation rates, and will now try to develop something much more complicated. So now we're looking for prospective data collection and will eventually have to consider cumulative data. Only then will we be able to answer the questions that patients have. At this stage we can't answer those questions at a global level. We can answer them centre by centre, or even country by country, but not at the global level. And for me that remains our main purpose.