Controversies in severe male factor infertility and in embryo transfer 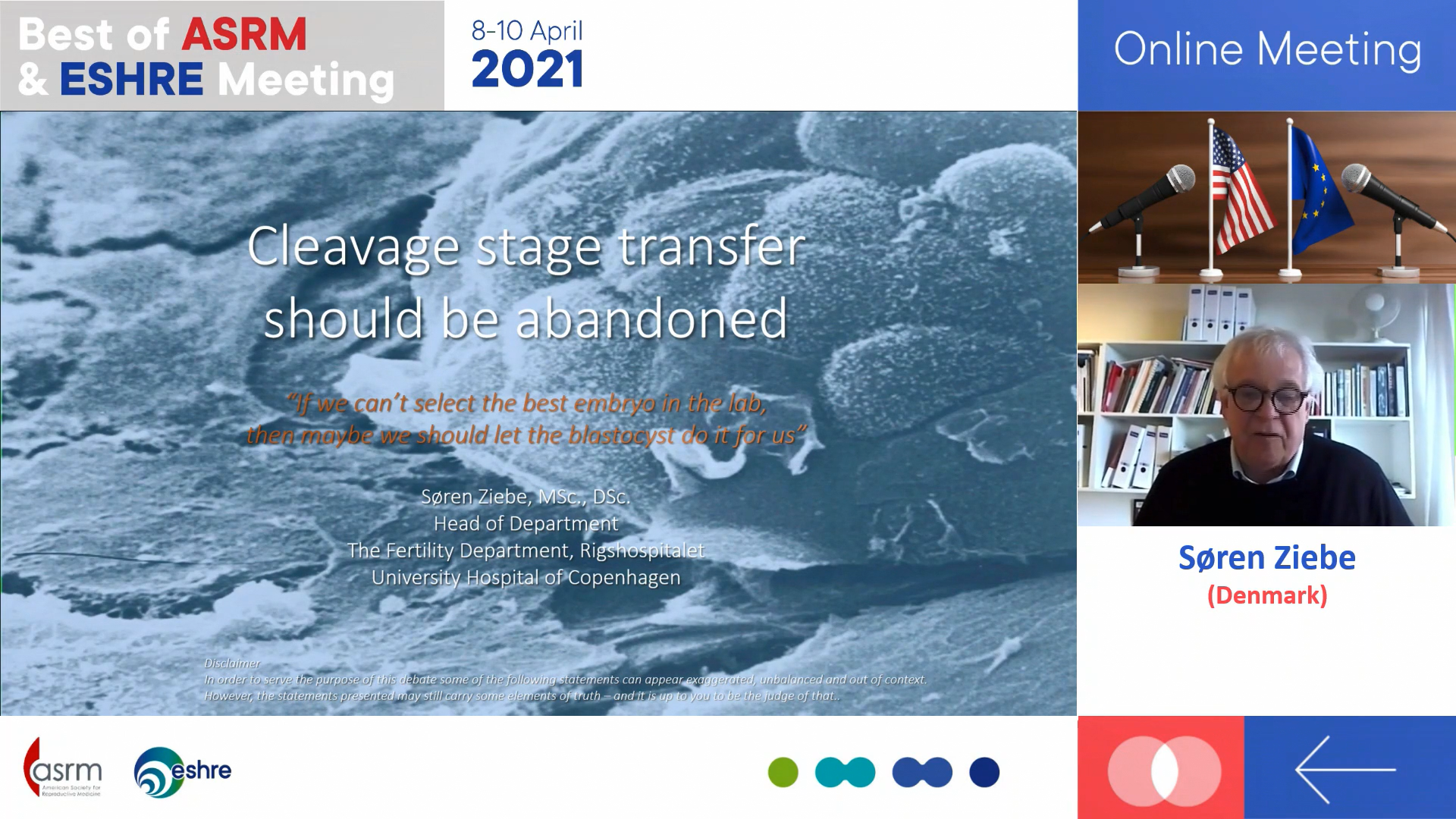 On this third day of the Best of ASRM & ESHRE meeting the question of preconception factors associated with severe male factor was raised with new data from human and mouse models, while a debate on embryo transfer explored the preference, if any, of blastocyst over cleavage-stage transfer.

Managing severe male factor
Male health not only affects the next generation but is transgenerational, with epigenetic changes in sperm affecting embryo development.

Professor Adam Watkins from the University of Nottingham in the UK said that male age at conception, diet, obesity and increasing infertility play a major role in outcomes for offspring and their descendants. But the consequences of these and other lifestyle factors on ART success have largely been ignored until recently, he said, in contrast to the wealth of findings on the influence of female health.

Data suggest that what a man eats may lead to sperm-specific epigenetic changes which affect gene expression in early-stage embryos. A mouse paternal diet model created Watkins and colleagues has enabled further research in this area: his study into low protein diets (LPD) shows offspring from LPD sperm develop characteristics of metabolic dysfunction.(1)

He also presented as yet unpublished data from his colleague Hannah Morgan on paternal diet based on placental RNA sequencing. Results show striking sexually dimorphic changes between male and female mice offspring of fathers fed a normal protein diet, a LPD, or high fat and sugar diet (WD). Differences in gene expression between the sexes that should have been present had virtually disappeared in the WD male offspring which, said Watkins, poses the question: ‘Have males become more feminine or females more male?’

As for treatment advances for severe male factor, the evidence base is limited. Professor Peter Schlegel from Weill Cornell Medicine in the US said management of non-obstructive azoospermia (NOA) had been hampered by low retrieval rates and – with sperm a limited resource – this has led to ‘desperate measures to enhance treatment success’.

For couples with NOA, IVF with sperm retrieval is the routine approach, though not straightforward and still with low fertilisation rates, even with ICSI. Data reprtedby Schlegel showed microdissection testicular sperm extraction to be superior to conventional multi-biopsy TESE and other techniques, with lower risk of testis damage from scar tissue and better maintained testosterone levels.

Prior to extraction, success is unproven for both medical and surgical treatments currently available. Multiple uncontrolled studies have proposed use of selective estrogen receptor modulators and aromatase inhibitors on the grounds that boosting testosterone levels may enhance spermatogenesis. However, Schlegel said evidence is lacking to support medical therapy: AUA/ASRM has issued guidance to this effect.

Varicocele repair causes treatment delays, has yet to be shown to have any benefits overall and is not recommended by the AUA/ASRM for men with no measurable sperm - and Schlegel presented data suggesting that frozen sperm has substantial limitations when compared with fresh. The take-home message from his presentation was that, when sperm are the limited resource, every effort should be made ‘to optimise the chance of pregnancy with any sperm available’.

Debate: Cleavage stage transfer should be abandoned
Everyday reproductive medicine has seen a shift in practice from cleavage stage to blastocyst transfer. With evidence of higher live birth rates ffrom fresh day 5 embryos, is it time to move on from transfers on day 3 of development?

This head-to-head saw Søren Ziebe, from Rigshospitalet University Hospital of Copenhagen in Denmark, arguing in favour, and Catherine Racowsky from Harvard Medical School in the US and Hospital Foch in France (and a former President of ASRM), defending cleavage stage transfer.

Ziebe admitted he was a hesitant advocate of scrapping day 3 transfers altogether, having spent much of his working life ‘looking for markers of competence’. Deciding when to transfer is always a challenge, he said, and the accuracy of embryo quality assessments is often wide of the mark.

However, he built his case around the higher implantation potential for blastocyst transfer gained from the self-selection of embryos – ‘If we can’t select the best embryo in the lab, then maybe we should let the blastocyst do it for us.’ Do we have the detailed biological knowledge necessary, he asked, to ‘access early embryonic competence’ given inconsistences in evaluations among observers.

Targeting embryo research, Ziebe listed the number of high-quality RCTs to date, which show no efficacy in improving pregnancy chances (PGT-A, for example, as evident in Thursday’s debate). His solution was more innovative science – ‘not more of the same’ – yet studies which could identify new quality markers (for example, morphometric embryo analysis) are far and few between.

To back up his case further, the embryologist referenced Cochrane Review findings of a small but significant difference in live birth rates in favour of blastocyst transfer, with the likelihood that longer culture means safer outcomes (more SETs), fewer embryos transferred and fewer multiple pregnancies.(2)

In response, Racowsky used the same review to put forward the case for cleavage stage transfer, citing the evidence of very low risk of transfer cancellation, higher rate of embryo freezing per retrieval, and no difference in the odds of cumulative LBR for undefined cryopreserved embryo transfers. The flaw in the argument for abandoning day 3 transfers, she said, is that blastocyst transfer alone cannot achieve the goals of ART for poor prognosis patients. A study last year showed the chance of a live birth for women with only one day 3 embryo is significantly higher than for day 5 (9.7% vs 4.4%).(3)

What’s more, Racowsky pointed out, leaving embryos to develop for longer relies on ‘an efficacious and reliable culture system’, to which Ziebe’s rebuttal was that confidence in culture systems has increased. In the end, Racowsky’s argument won the audience vote with 91% backing her, while both participants agreed more RCTs are needed to settle the issue.