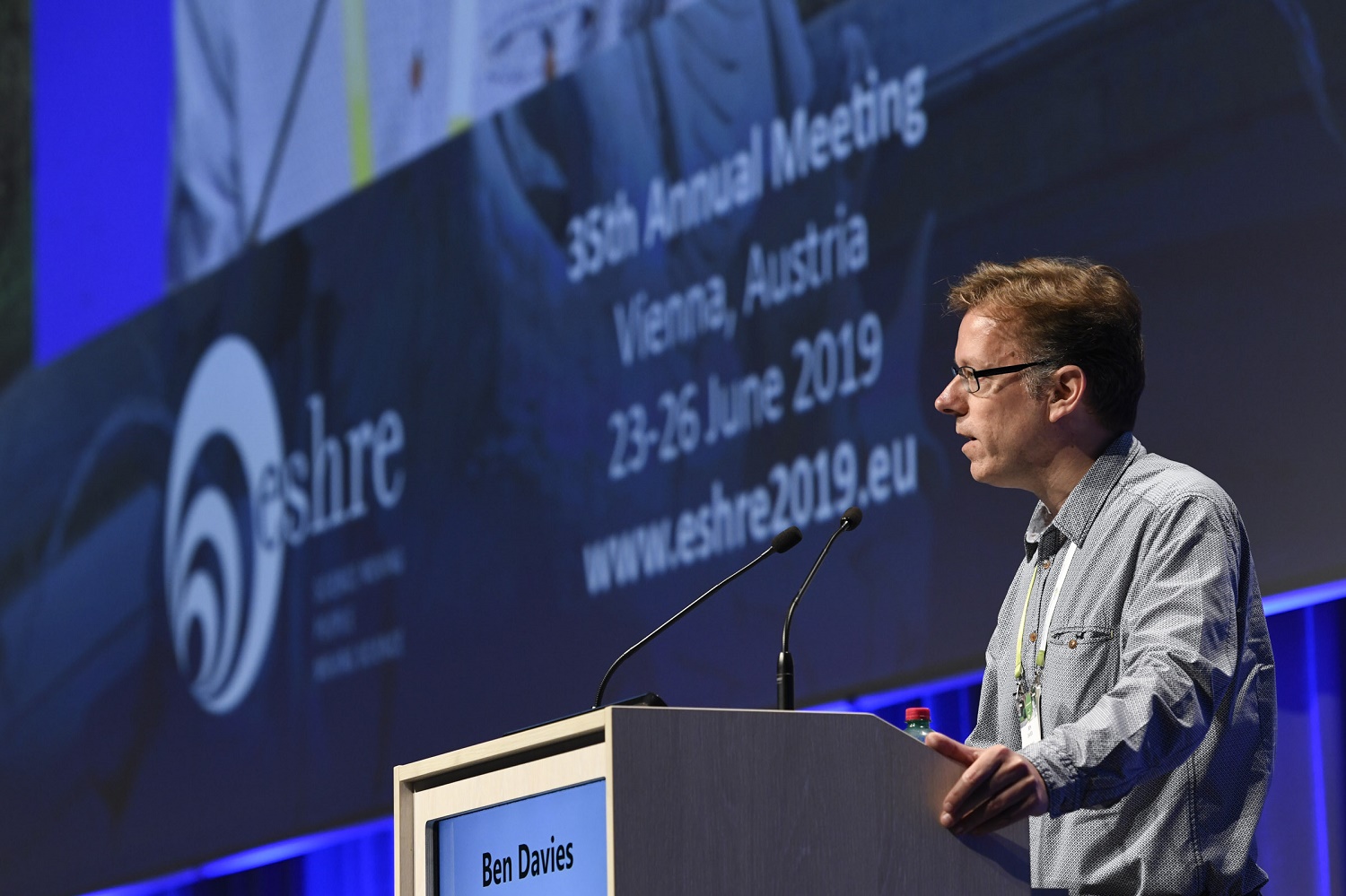 Professor Ben Davies from the University of Oxford reviewed progress so far with CRISPR gene editing.

A keynote lecture to open this year's Annual Meeting reviewed the most debated and controversial scientific topic of the recent year: germline gene editing.

The opening keynote session of this year's Annual Meeting was host to Professor Ben Davies of the Wellcome Centre for Human Genetics in Oxford to deliver a lecture on the most debated and controversial scientific topic of the past year: germline gene editing. Davies, who joked to have 'never touched a human embryo', is a mouse geneticist focused on the development of novel and reliable methodologies for the generation of genetically modified models to study disease. Drawing on his experience with gene editing tools, he described how these work, the opportunities for their application in the preimplantation embryo, and their limitations and drawbacks.

There was a time, said Davies, that the introduction of mutations into the genome was every geneticist’s dream. Attempts were made using DNA templates, but the methodologies were disappointing in their inefficiency and lack of versatility. But in 1994 a publication in PNAS by Rouet et al introduced the first ‘molecular scissors’, which allowed for the cut of the genome at will. The scissors, Davies explained, was a construct comprising an endonuclease enzyme and a RNA template. The latter would guide the construct to the desired DNA location, where the endonuclease would cleave and, consequently, stimulate the cell’s DNA repair mechanism. And it is this construct, now termed CRISPR, which is leading all major genome-editing expeditions into the mouse and human.

Videos showing injection of CRISPR into mouse zygotes showed how the procedure required not just expertise but, even then, time. It is still a lengthy (2-3 hours) procedure and, if not delicately performed, may even induce stress in the developing embryo. To circumvent this, Davies' lab now uses a method of 'electroporation' as an alternative way to introduce CRISPR into mouse zygotes. By means of electroporation, he said, 'you are pretty much done within 5 seconds', arguing that the method is additionally likely to allow the CRISPR reagents to work more efficiently when compared to microinjection. Indeed, it was evident from his data that electroporation reduced the percentage of vanished embryos and increased mutagenesis.

However, it's the complications which lie downstream the successful introduction of CRISPR to the mouse zygote which add a layer of complexity and concern to transferring such research to humans. Such undesired effects included off-target mutagenesis, on-target mutation in cases where only a single copy of the gene was targeted for editing, mosaicism and random genome rearrangements.

Overcoming such complications, said Davies, is pivotal for the CRISPR methodology to be ever considered in a clinical context, and 'any [clinical] application is at present premature until we have a better understanding of the technology'.

Such caution proved the opportunity to directly criticise Jiankui He, whose announcement of the birth of CRISPR twin babies late last year caused such an upror of protest. Davies stressed, however, that such controversy will see ethical regulations now gather momentum and encourage a more controlled evolution of gene editing research.

For the last part of his lecture, Davies emphasised that developing high-specificity reagents for gene editing - for example endonucleases that reliably cut a unique genome sequence, or base editors that alter just a single letter on the genome sequence - will help get a solid grasp of the gene editing technology. Perhaps then, therapeutic applications could finally be in sight.

Gene editing not yet safe or effective enough for human use